Finally got to watch Macross Zero!!!! 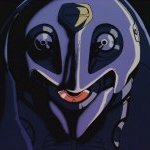 By Valkyrie Griffon
July 22, 2017 in Movies and TV Series