Empire: The 301 Greatest Movies of All Time 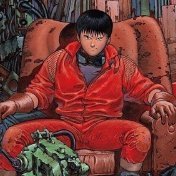 By Kanedas Bike,
June 1, 2014 in Anime or Science Fiction