EDIT: The announcement of the winners have been moved up to May 25th. I have 4 pairs of tickets to give away. 2 pairs for each of the 2 venues that is currently scheduled in the US leg of May’n’s World Tour (Rock Your Beats). One is at the Key Club in Los Angeles and the other is at Yoshi’s in San Francisco.

Click at the banner to the right or in the forums for more info on the tour and anything related to May’n in the USA.

1. You must be in California to enter.

2. To enter for the bay area show, you must live in Northern California (above the San Luis Obispo, Kern County and San Bernardino northern county lines.)

3. To enter for the Los Angeles area show, you must live in Southern California (below the San Luis Obispo, Kern County and San Bernardino northern county lines.)

4. To ensure that a current active member wins a ticket for each of the venue, you must be already signed up before this post and you must have above 100 posts by the date of the drawing.

5. Any registered member is eligible for the other pair of tickets (for each venue), so you can register one hour before the drawing and you are eligible. Anyone caught making duplicate accounts just to enter will be automatically banned. (Duplicate accounts are not allowed per TOU.)

7. Winners must provide Name, Email address, and Street Address thru PM within 48 hours of drawing, so make sure you check this thread on or soon after the 25th of May. Alternate names will be drawn just in case the winners fail to contact me within the time allotment. Name and email will be forwarded to May’n’s concert promoters and by entering the contest, the winners agree on these terms.

8. Tickets are non-transferable. These are WILL-CALL tickets and you will be asked for ID at the show. 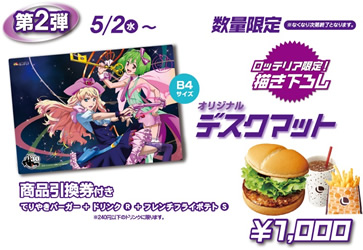 Happy Macross to you, boys and girls!

Yes, it would seem that the celebrations are in full force for the 30th Anniversary of everyone’s favourite Fortress Exceeding Time and Space.

We have all heard about the two exhibitions currently being held in Tokyo — “Macross The Design” in Shibuya and “Super Dimensional Exhibition” featuring the 1/1 scale Messiah Valkyrie.  But there are other things happening, too.  Here’s a round-up of some of the local events coming to Tokyo.

END_OF_DOCUMENT_TOKEN_TO_BE_REPLACED

I have just come back from Shibuya.
I could get the numbered ticket of Mikimoto-san’s autograph session. You know this building. Well, Parco is not this one. After taking the picture above, I went to Parco Part 1. About 40 fans were waiting then.
In the venue, Taking pictures are prohibited. I rewatched the web site couldn’t find out such a rule…

END_OF_DOCUMENT_TOKEN_TO_BE_REPLACED

[Editor’s note: I’ve been meaning to post our very own member Vanpang and Ikhii’s interviews on the front page since day one. In celebration of May’n’s World Tour and it’s US leg, I guess there’s no better time than now to get to it. Next week will be his 2011 follow up. Better late than never...]

The Anime Festival Asia 2009 (AFA 2009) was held at Suntec Convention & Exhibition Centre, Singapore on the 21st and 22nd November 2009.  AFA09 spanned over 5,000 square metres of floorspace at the convention hall and is the biggest anime convention in South East Asia.  The AFA09 organizers managed to get an impressive list of famous artistes and personalities in the anime industry to participate in AFA09. Those personalities included Nakabayashi Mei (aka “May’n”), Yoshiki Fukuyama, Ichirou Mizuki, Shoko Nakagawa (aka “Shoko-Tan”), Kaname, Danny Choo and Director Mamoru Hosoda (The Girl Who Leapt Through Time, Summer Wars)

Macrossworld members ikhii and vanpang had an opportunity to interview May’n. However we regret to inform that we did not manage to interview Yoshiki Fukuyama due to uninformed changes of his schedule at the very last minute.

END_OF_DOCUMENT_TOKEN_TO_BE_REPLACED Animazement, a con that takes place in Raleigh, North Carolina, just added  Macross legend Ichiro Itano to its guest list. This will be held Raleigh Convention Center on May 25-27.

END_OF_DOCUMENT_TOKEN_TO_BE_REPLACED Let’s catch up on some items now that I have some time to post them.

May’N has added US dates for her world tour. It looks like L.A. and San Francisco are the lucky cities so far. Discuss Here.

Yamato Toys posted pics of their VF-1D re-release with the option parts in color. Discuss Here.

The Miss Macross 30 Contest will have 2 categories. One for singing and one for acting.  Discuss Here.

Screenshots for the video game called “My Boyfriend is a Pilot” for the PS3 have been posted. This game will be bundled with the DYRL limited edition Hybrid Pack .  Discuss Here.

Gallery after the jump

END_OF_DOCUMENT_TOKEN_TO_BE_REPLACED Just announced minutes ago via the Macross F fanclub newsletter (er…email)… the events that are to be held for Macross 30th Anniversary are:

(3) Macross 30th Anniversary Exhibition – MACROSS: THE DESIGN (to be held from April 26th at Shibuya Parco)

(4) 30th Anniversary Macross Exhibition ~ Valkyrie de sasotte! (to be held from April 28). – UPDATE – This will be held in Ikebukuro and will apparently feature a 1:1 scale VF-25 Valkyrie in Gerwalk mode.

Further details have just gone up in Japanese at the Macross 30 website.

Anyone going? Sound off in the forums! 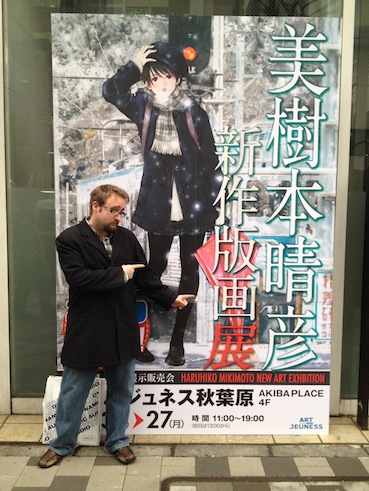 Haruhiko Mikimoto held his annual art exhibition at the Art Jeuness gallery space in Akihabara from Feb. 23rd ~ 27th . As in previous years the main purpose of the exhibition was to drum up some sales for Mikimoto’s (primarily) original art, although the man himself dropped by on Saturday 25th for a small talk session and autographs.

With prices averaging 300,000~600,000 yen and upwards, there was no way that yours truly could afford one of the gorgeous pieces that adorned the walls, however I did hang around for the talk session and the chance to ask the big man a question or two.

(for anyone wondering, those fortunate enough to receive an autograph at these events can only have the signing board provided by the venue autographed. Taking personal merchandise to have signed is not permitted). At the end of the session, Mikimoto directly addressed the pink elephant in the room – namely, possible plans for Macross’ 30th Anniversary. While he was fairly tight lipped on the subject, he did offer the following tidbits:

-There is currently a proposal for a Macross Exhibition of some kind. This would possibly be held in two locations in Japan for a limited time (ie, similar to the Gundam Museum which was a temporary exhibition held for 2 days in 2009). Discussions are still at a fairly early stage, however he had been asked to provide some of his Macross artwork and was currently in talks as to whether original prints or digital reproductions would be needed.

-Mikimoto will be releasing a new artwork book this year. He is aiming for Spring (hopefully by the end of May) but the release date hasn’t been locked in yet. While the book will be manly his original characters/works, this did lead to the subject of…

-A potential art book of his Macross related works. This is something that he is currently discussing with related parties however talks are at a very early stage. It’s something he is interested in doing but he doubts it would be ready for release this year given how busy he is with his original artwork book and schedule doing Macross The First. Regarding Macross The First, he mentioned that his publishers had asked that he focus on Macross The First as much as possible this year, meaning that, while he had recently been considering restarting Gundam Ecole du Ciel, this has taken a backseat to his Macross work for the time being. He did, however, say that he wanted to continue Ecole in the near future.

Also regarding Macross The First, while answering another question he noted that he didn’t know whether the story of the Manga would continue past episode 27, Love Drifts Away (愛が流れる). Actually, at this stage he couldn’t even say whether the manga will make it that far.

While getting his autograph, I managed to ask his opinion of a remake of the original Macross. Now, keep in mind that this wasn’t as simple as asking him whether he wanted a remake to be done or not because I’m pretty sure he wouldn’t have answered. As it was he protested that he was merely a character designer and couldn’t comment on any goings ons behind the scenes or whether or not new anime was actually in the works. HTat being the case, I had to hedge the question in a different manner – With the current trend of remaking classic mecha anime (Yamato 2199, Gundam The Origin). in his personal opinion, keeping his work on Macross The First in mind, IF the original Macross were to be remade, what would he personally like to see changed or fleshed out?

Mikimoto’s answer was as surprising as it was simple and, in retrospect, should have been expected – he wanted to expand on the love triangle. This was because he felt the Misa-Hikaru-Minmay relationship had ceased to be a love triangle a good two thirds of the way through the story despite the fact that Hikaru didn’t actively choose one woman over the other outright until the final episode. He had more or less drifted towards Misa because Minmay wasn’t around as much. Therefore he would like to see Minmay kept in the picture somehow to keep the love triangle going and then reach a conclusive, convincing end.

Unfortunately I forgot to ask him about the official spelling of Riber’s name – oh well, maybe next time.